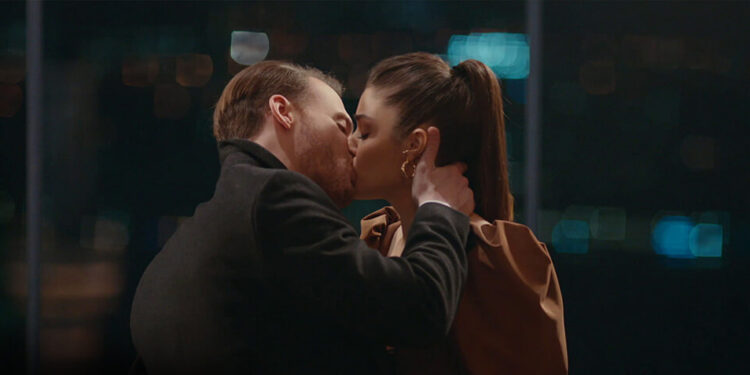 Kerem Bursin and Hande Ercel… Sen Cal Kapimi or in English, Love is in the Air, that brings together two successful actors… It became one of the most watched romantic series of the year. We’ve prepared everything for you about the popular series.

In this article you will learn everything about the much-loved series Sen Cal Kapimi (Love is in the Air).

Sen Cal Kapimi (Love is in the Air) started on Turkish television channel Fox TV on 8 July 2020. The series was produced by MF Yapim.

MF Yapim has also made other successful productions on Fox TV. Among them are series such as Ogretmen, Kadin, Cocukluk and Bir Ask Hikayesi. He also produces Mucize Doktor series, which continues to air.

Sen Cal Kapimi was meeting the audience on Wednesday nights when it first aired. The day of the series changed later. That’s why a lot of viewers searched for the phrase “What day is Sen Cal Kapimi aired?” on various search engines, such as Google.

The series currently screens Saturday at 8 PM Turkish time. After about an hour of recap, the new episode airs.

The series brings together young and talented players and experienced names. Of course, the series stars Hande Ercel and Kerem Bursin. Neslihan Yeldan, Bige Onal, Anil Ilter, Cagri Citanak, Elcin Afacan, Melisa Dongel, Sarp Can Koroglu are among the actors of the series.

The series is mostly shot in Beykoz district of Istabul. However, the team chose the Cesme district of Izmir to shoot some scenes.

Sel Cal Kapimi had been on the agenda for a long time due to the video of Hande Ercel and Kerem Bursin.

The images have long been talked about on social media. Because Hande Ercel had just separated from her lover Murat Dalkilic, whom she was about to marry at that time. After this video, the claims of love between Ercel and Bursin were not stopped.

We described the latest development on this issue in our previous article. You can read by clicking here.

Sen Cal Kapimi is among the most popular productions abroad among Turkish series. The series is sometimes a trending Topic on Twitter in countries such as Italy, Spain, Brazil, Argentina, Chile.

Although the series continued to air, it was marketed to many countries abroad. He signed with Madd Entertainment to market the series abroad. The English title of the series was set to be Love is in the Air.

The series was fined by the Turkish Radio and Television Supreme Council for its latest bathtub scene. He was fined administrative, citing that the Jacuzzi and massage scenes in the series were “contrary to the Turkish family structure”.